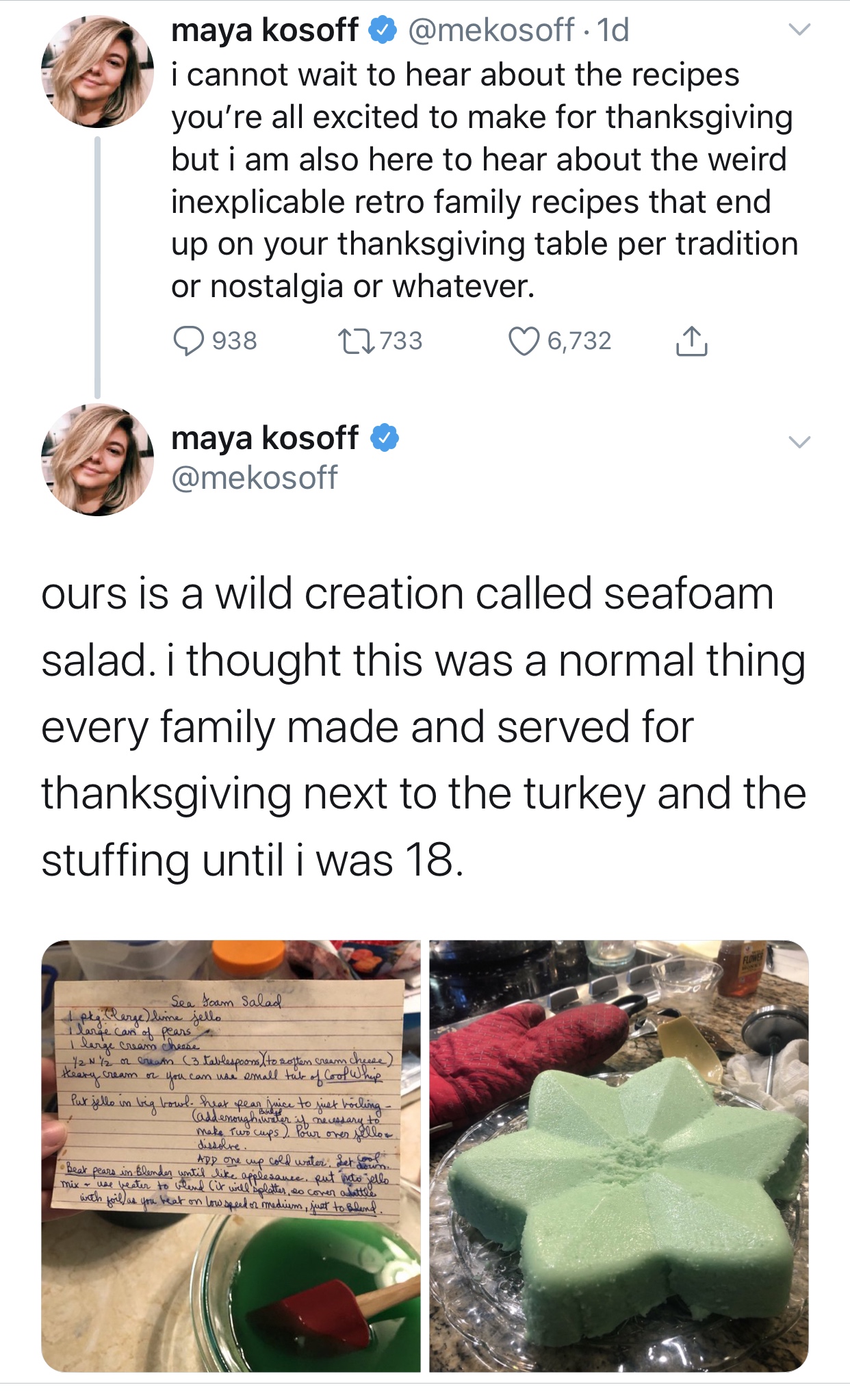 I keep reading pears as peas, possibly because of the colour, and getting flashbacks to when Rachel made shepherd's pie.
Protected by the ejaculation of serpents
Top

Rachel’s shepherds pie doesn’t seem to outlandish to me anymore after some of the random combinations I have eaten here.

Case in point; Chicken salad in timbales with a frozen fruit salad as a side. Not a dessert, a side. An actual accompaniment.

That is such a confusing plate of food

I think I’d walk out if that was put in front of me.
Top

I remember and love this dinner.

I don't mean love in the sense that I'd like to eat it.

Even the chicken salad looks revolting, never mind the frozen ice hockey puck.
Protected by the ejaculation of serpents
Top

As we’ve taken this on a thanksgiving tangent already I will keep going. Here’s my sweet potato casserole. I ended up making an entirely random recipe that a colleague recommended that was nothing like any of the others I’d read - not least because it had Grand Marnier in it

The sweet potato mix itself was quite tasty - for a dessert. I could imagine putting it into a pie and topping it with meringue, or mixing in cream cheese to make a cheese cake. What still doesn’t make sense is eating it with turkey. Anyway, I couldn’t decide between crunchy or marshmallow topping, so I did both.

1F0D11FD-7058-4146-A52E-3A9B7500443F.jpeg
Sadly, the topping got burnt as we were trying to get things on the table. Despite that, it was received quite positively on balance, and 2/3s got eaten, which is more than I would have guessed. Someone even took some home!

9BE3A8D8-6F8A-45F6-94A4-FB316554C53E.jpeg
I was so miffed with the SPC that I decided to make an actual dessert, and am quite pleased with how this roulade came out. It had to be dairy free so I used whipped coconut cream inside, with a cranberry orange compote. Quite Christmassy!

DD4AEC7E-C012-4794-8F2C-1DE226BCAC9C.jpeg
You do not have the required permissions to view the files attached to this post.
Top

I’d that persimmon on the roulade? And frosted cranberries?

are they hard to make?

Your sweet potatoes look so pretty. I would have had to politely pass on them with turkey though!

A plan is forming.

Christmas Eve’s early dinner will be ‘false fish’ (rice based recipe), herb-coated root veg and rye bread. P will have some salmon/prawn thing he got a voucher for.

On the day, breakfast will be caramelised bananas and peanut butter on toast/bacon sandwich.

Soup will be minestrone with Christmas tree shaped croutons.

Main course will be beef and pigs in blankets/mushroom Wellington with Yorkshire puddings, semolina roast potatoes with garlic and thyme, mashed potatoes, sprouts with marmite butter, cider and pear braised cabbage, thyme roasted roots, stuffing from a box and gravy.

I have a Christmas pudding already, which I’ll share with Sproglette. P has a voucher for a caramel biscuit gateaux bar, which I’m hoping is veggie as Elvis doesn’t like pudding.
Top

I made the dauphinois pies. They were very good, if massively calorific, and could be easily adapted to ring the changes.

Note that if you are using sheet pastry (as opposed to block) you probably need two sheets. I used one sheet of JusRol and just managed to cover 4 small pies by stretching it a bit. A lot depends on the size of the dish you use for the potatoes though.

. Surprisingly, it worked, but obviously it had to be spread, rather then sliced. I think they would be good with a rasher of bacon over the potatoes, too.

We had them with red cabbage in red currant juice to cut the richness, which worked well, and I had a leftover forkful cold when I was clearing up, and that was good, too, so they would be ok served on a buffet if they were made a bit smaller.

There were a couple left when I left the house - if they are still there when I get back I’ll take a photo.
Top

We will be 3 omnivores and a vegan. Christmas Eve I will do Ottolenghi's vegetable paella then for the big day I'm planning goose, stuffing, roast potatoes, parsnips, celariac puree, red cabbage and something green, plus a vegan dish - yet to be decided.
I'd really appreciate some thoughts on what I can do for boxing day & the day after. I will have cooked a small ham and a turkey crown and my usual approach is to put my feet up and let people make themselves sandwiches, have cold cuts with bubble & squeek, chips etc for a couple of days and then make a turkey and ham our if there are any leftovers but this won't work for our vegan friend.
Any thoughts on how we could incorporate her needs with our usual lazy plan - bearing in mind that I'm in Spain and there's not a huge range of pre-made vegan food available - tofu, veggie burgers and vegan Quorn are about it.
Top

That sounds tricky, elena. Do nut roast or any of wendy's choices reheat well?

I'm not yet doing anything for Christmas but am planning to convince MIL to let me do either aperitifs, starter, or dessert. I was looking at "bauble" desserts yesterday and eyeing up my silicone moulds

S likes Quorn Roast in sandwiches. They are pretty insipid-looking, but you could jazz one up with cranberries and vegan stuffing balls.

There is a recipe here that looks tasty and easy if you can find an egg substitute to bind it together. Maybe a bit of Vecon or Marmite dissolved in water would do it. That would be good on Boxing Day, too.
Top

I have just spotted Wendy's caramelised bananas for breakfast! That would be lovely on a croissant for non-bacon eaters (and bacon-eaters, too).

Here are my pies. They look a bit pale and limp in the photo, but they are healthier-looking in reality

We will be going for the traditional turkey dinner, must get to the butcher to order it actually. Christmas Eve is more of a puzzle. We always used to go to the pub but last year they stopped opening the kitchen in Christmas Eve (understandably as they’re open Christmas Day). L requested a big fry up for tea last year, I may repeat that. We can’t do takeaway as my mum won’t eat it.
Top

Morganna wrote: ↑
Mon Dec 02, 2019 1:29 pm
I have just spotted Wendy's caramelised bananas for breakfast! That would be lovely on a croissant for non-bacon eaters (and bacon-eaters, too).

Here are my pies. They look a bit pale and limp in the photo, but they are healthier-looking in reality

I’d have a go on one of those! Well done Morgs, thanks for taking one for the team and recipe testing this one. It was probably quite a hardship

Morgs, if you still have one, can you do a 50p for scale photo please?

Thank you for indulging

R and I will be with my mum, who really just wants to watch television and be handed food at appropriate intervals. (Wouldn't we all!?

) She has a stoma bag, so quite a lot of traditional Christmas food is out of bounds and she needs to take care not to overeat - but does, anyway.

There's just the 3 of us on CD, so I persuaded mum that - with only two of them to eat it - a whole turkey crown was a bit extravagant. Mum reluctantly agreed, but was quite disappointed. I'm going to do a small Beef Wellington for her and R, and a veggie version for me. I'll do a soup to start and we'll have traditional Christmas Pudding after, by which time mum will be fit to explode!

I'll do something veggie for Christmas Eve, and maybe a cheesecake for pud. Dipping things and nibbles doesn't really work with our set-up now. This is the only time of year that I really miss our London home as, each year, we used to issue an open invitation to any family members who found themselves at a loose end. We usually had one or two staying over the holiday and anywhere between 6 and 10 sitting down to lunch on CD.

On Boxing Day, my cousin and his wife are coming for dinner, which will be lovely - though mum is confused by the lack of CD leftovers, and has 'warned' him that I will probably only cook vegetables!

Actually, I'm thinking of doing individual cheese and onion tarts, a roast gammon joint, with creamed leeks and roast root veg (I'll do something nutty for me), followed by something chocolatey. :vague:
"Inagh to China Motorcycle Ride" blog, if you're interested: www.inaghtochina.com